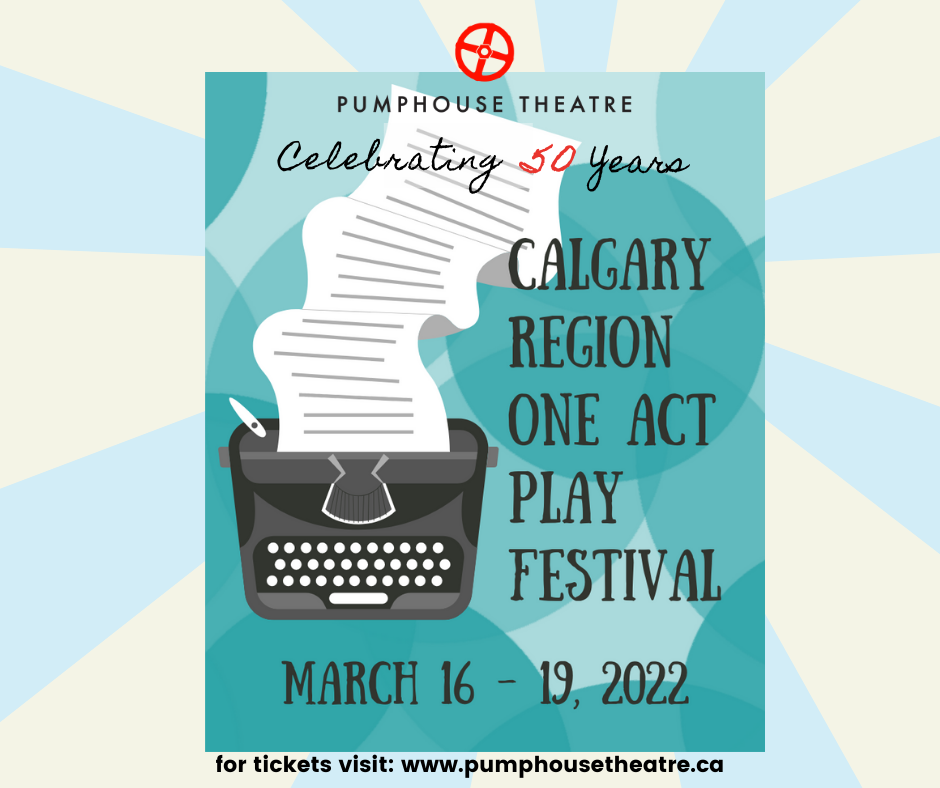 Performances are all PG-13 or above, and are not recommended for young children

Showtimes: 7:30pm each evening. Each performance is under 60 minutes in length
Tickets: $15 General Admission
https://www.pumphousetheatre.ca/ If you have questions or concerns, contact kelly@pumphousetheatre.ca or 403.263.0079 ext 100

The Pumphouse Theatre and Alberta Drama Festival Association have returned for the 37th Annual Calgary Region One-Act Play Festival. Over four evenings, from March 16th-18th, we are thrilled to be presenting eight one-act plays from a diverse array of local artists. From drama to comedy, new work to classics, the One Act Play Festival offers something for everyone.

Each night will feature a new group of two performances, all which will run under sixty minutes in length. After the shows are completed, the audience is encouraged to stay for our festival adjudicator’s public adjudication. An award ceremony will take place on Saturday March 19th where our festival adjudicator will decide the recipients of the Calgary Region Awards including Outstanding Actor, Outstanding Direction, Outstanding Technical Merit, Outstanding New Work, and Outstanding Production. The recipient of this last award will represent the Calgary Region at the Provincial Festival happening in May in Canmore, AB.

Come see some of Calgary's most passionate up and coming theatre artists. Come take in a night of great entertainment while supporting local performing arts!

SHOW #1
398.2 by Sya Sen presented by Daisy TheatreA jaded librarian lives a monotonous existence until a new face walks through the library doors and forces him to confront his preconceptions.
Comedy | 30 min398.2 is produced with permission by the playwright

SHOW #2
SEAGULLS by Caryl Churchill presented by Night TheatreA woman with an extraordinary gift begins to fear her powers are waning.
Drama | Comedy | 35 min | ADVISORY—Strong Language and loud voicesSeagulls is produced with permission by Concord Theatricals

SHOW #1
EVERYBODY LOVES RAITA by Yasmin Khan presented by Too Mach!Two people with South Asian heritage discuss their love of food and explore their complicated multicultural identities before an explosive family dinner.
Comedy | 40 minEveryone Loves Raita is produced with permission by the playwright

SHOW #2
THE PERFECT PSYCHOS by Magaly Gil Orellana presented by Stories to Think AboutAn annoying neighbour tries to save his skin by trying to save the marriage of two serial killers.
Dark Comedy | 20 min | ADVISORY: Strong Language and ViolenceThe Perfect Psychos is produced with permission by the playwright

SHOW #1
FRANK by Sya Sen presented by Sundog StorytellersA group of retirees living in a care home share breakfast together every day; the star of the show is Frank, a former RAF pilot who entertains everyone with outlandish stories.
Comedy | 30 minFrank is produced with permission by the playwright

SHOW #2
A LADY OF LETTERS by Alan Bennett presented by Confederation TheatreMiss Ruddock writes letters. There, ironically, Miss Ruddock finds freedom and is, for possibly the first time, happy.
Comedy | 40 minA Lady of Letters is produced with permission from the Fair Dealings copyright policy